“perhaps the most useful thing art can offer is the opportunity to slow down a bit, to stop and look, to stop and turn something over: that is the limit of my ambition, really. If the work can propose that, then that is enough.”

For the Wall  (2013) is a book by David Bellingham, produced beautifully at his WAX366 press, which puts into print a couple of conversations we’ve had in the last few years. I find David’s work really compelling: his attitude to making and  his interrogation of language really resonate with me. Reading his words now, I’m struck by how modest they are, not in the sense of coy or self-effacing, but rather just in their embrace of the pared down and the minimal. Simply prompting people to slow down, to stop, to look: it’s much more difficult than it sounds.  I can’t but feel my own questions are rather cumbersome and clumsy in comparison.

a book is a performance 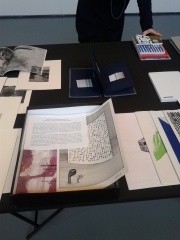 This exhibition was curated in collaboration with Sophia Hao of Duncan of Jordanstone Collage of Art, home to the Centre for Artists’ Books. Sophia invited me to work with her to explore ideas for showing the Centre’s new acquisitions. The title, a book is a performance, was drawn from Vertical Balcony – a Real Gazebo, one of the featured books which was produced by Bruce McLean and Mel Gooding at the Knife-Edge Press.  The idea of the book as a performance space also resonated with some of the historical work that I’m currently doing, and with Sophia’s approach to making and curating, so we both found it a useful paradigm through which to approach the books.

The exhibition was opened by Alec Finlay’s performance reading Out of Books and punctuated by a durational live performance I used to by Sarah Sanders.

Modernism, Print and the Book 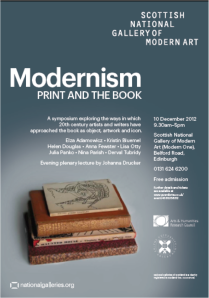 A symposium exploring the ways in which 20th century artists and writers have approached the book as object, artwork and icon.

Organised in collaboration with the library and archive team at the Scottish National Galleries of Modern Art and supported by funding from the Arts and Humanities  Research Council.

Award-winning book artist Hugh Bryden and I led a workshop on artists’ books at Kilmarnock’s brilliant Imprint Festival.  We talked about the history of artists’ books and what made the form so interesting before creating our own books using lots of the tips and techniques that Hugh shared with us. 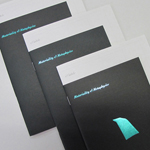 In the summer of 2012, I worked with Sophia Hao to edit a special edition of  & Labels (Issue 4: Duncan of Jordanstone) on the theme of Materiality and Metaphysics. As Sophia wrote, “in this pairing of what are commonly understood as antithetical terms, an ephemeral and subtle common ground is revealed, in which the world of matter is both illuminated and occluded by its continual encounter with the timeless action of thought and reflection.” The issue featured writing by critic Chris Jones, philosopher Joe Hughes, and artists Kraig Wilson, Lys Hansen and Viola Yeşiltaç.

The Archive of Reading

In the summer of 2011, I worked with Julie Johnstone of the Scottish Poetry Library to stage an exhibition of work and research produced by the Poetry Beyond Text: Vision, Text and Cognition project. At the same time, I worked with project colleagues and programmers to develop and built a digital Archive of Reading to be housed at the SPL and launched during the exhibition. This project began from the premise that although there are multiple, vast and disparate archives of writing, the actual process of reading – the cognitive, emotive and physical process which occur while an individual is engaged in reading a text – remains largely ephemeral and hard to document. The archive holds readings of various forms, from eye-tracking records to creative visual responses.